Deniz Tek is best know for his work with Radio Birdman. In the thirty years since, Den has kept a busy schedule, playing and recording with a long list of collaborators, one-offs and his own band. Over the years Deniz has collected some great road stories which he will share with you here. His current activities will also be chronicled here. Read on... 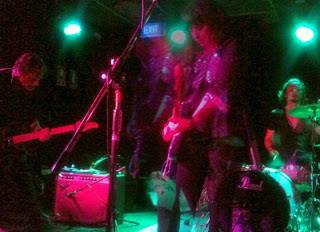 Deniz will be playing as guest guitarist with Penny Ikinger and her band at selected shows this coming weekend:

Penny has just released her new album "Penelope" on Citadel Records, Deniz was closely involved with the production of this landmark album, and contributed several guitar parts. Penny's music today is a unique and unforgettable blend of hard rock, pop, and psych. It features edgy experimental instrumentation underlining a very personal vocal delivery.

Penny's first album, the cult classic "Electra", is still available on Career Records, although only a few copies are left. It is sure to be a sought after collector’s item in the future, as no repressing is anticipated.

Visit Career Records for this and many other albums featuring Deniz's recent musical work.
Posted by Ronald Sanchez at 12:14 PM No comments:

Posted by Ronald Sanchez at 9:14 AM No comments: 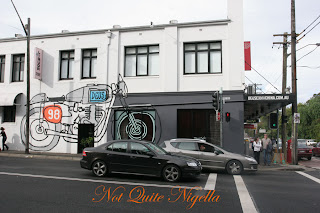 Last night was my friend Dare Jenning's 60th birthday party. Dare is the guy who di the very first Radio Birdman T-shirt in the little shed behind his share house in Coogee ... when we were heading over to meet Lou Reed and wanted to give him a T-shirt. Dare went on to create Mambo. The party was big  ... hundreds of people in his vintage motorcycle and clothing store "Deus  Ex Machina" on Parramatta Rd in Camerdown. Many famous stars showed up and did a song or two. Jenni Morris. Reg Mombasa from Mental as Anything. Peter Oxley from the Sunnyboys and his sister. My old band mate (from Radio Birdman) Warwick Gilbert, with his wife Julie Mostyn doing blues and R+B. Many others. The backing band was james Black ... they are the house band for the TV show Rockwiz. I closed the night by playing  "Aloha Steve n Danno". I had never sung it before, and the lyrics lagged the music by half a beat but it still went over well. In a rough and tumble way. Raucous! Warwick and Julie sang the "OOOO's".
Posted by Ronald Sanchez at 5:56 PM No comments:

Hey, thanks to Guy Stevens, I will begin to post some things again ... both new things, and also will reprise some things salvaged from my previous blog .... sort of a "best of" collection.  Today I got this poignant and thoughtful note from friend Joe Chonto in New York about the passing of one of soul music's greatest legends ... the message is worth being heard, so I am passing it along...
Deniz
Posted by Deniz at 10:08 PM 1 comment:

The Soul Movers Across The Western World

The Montana Soul Movers played a warm up gig in Billings on Sept 10th. Two days later Den and Lizzie flew to Spain to meet up with the Australian band, Pip Hoyle, Andy Newman, and Calvin Welch for a five date tour.

Posted by Ronald Sanchez at 3:16 PM No comments:

I got off the airplane at Bush Intercontinental Airport in 100 degree heat
like a hammer from the Sun's mind. It felt like George Bush Airport had
relocated itself to Iraq. The guitar made it ... United seems to be
getting better (touch wood!) Mort (my longtime friend and ex road manager
from Birdman days) picked me up curbside in his new Kia car with excellent
AC and we headed off across the vast concrete plains of Houston, high
tension wires crisscrossing the cityscape, holding everything down so that
it doesn't all blow away in the next hurricane. We went over to Morts
house, which is in Cypress Texas. His stepson Cole Rivoire cooked
excellent BBQ and the other stepson Spike brought over some boudin from a
little store that has the best local stuff. Boudin is a cajun staple which
is like a sausage filled up with rice, pork shoulder, liver, chilis,
spices. You eat it dipped in cane sugar syrup. Oh my! Fantastic...
Practice next morning (yes ... we started at 10 am which has to be a first
in rock and roll) at historic Sugar Hill Recording Studios. My band for
this visit are local session guys. I worked with some of them before on a
re-recording of the 13th Floor Elevators "Youre Gonna Miss Me". Tyson
Sheth, young aggressive session drummer; Kenny Cordray, master guitarist
and leader of the band Love Street; Paul English, keyboardist and master
arranger who's working with Willie Nelson and Johnnie Bush on a new
recording; and world famous Mark Andes who was the original bass player in
Spirit, and who spent many years in Jo Jo Gunne, Heart, Firefall and
others.  Some of the guys had done homework and others hadn't, but Mark
brough charts he'd made of the set. All it took was a couple of runs of
each song and we were ready to go.

That night we played at the Continental Club. It started in Austin several
decades ago ... then they opened one up in Houston. It used to be a swing
jazz club, then it was a burlesque house, and now it is home to
alternative and interesting bands, allied with a local independent vinyl
record store. It's a cool joint. They have an old dude selling hot dogs.
The only down side I saw was that the drinx were pretty light. When
getting a gin and tonic there, it is important to let the bar staff know
that you need a double.

A Beatles cover band kicked things off. The were wildly appreciated by a
big crowd, and when they finished up most people in the place cleared out.

The set went great. Love street opened it up with an original instrumental
"Under The Rainbow", then the Peter Green classic "Green Manalishi". Then
Tomas Escalante came on, with me, and I plugged my Rick 620 into a great
little Mesa Boogie Mark III loaned to me by Dan Workman. We played the
Spirit classic "Got A Line On You" (high energy version) and I sang the
backups with Mark Andes. A good moment ... Mark and I developed an instant
connection, that fired up the event, and added high octane fuel to the
rest of the set. Then we did San Francisco Girls, the 1968 Texas-Psych hit
from Fever Tree. Tomas left the stage to wild applause. Then I did my set
... opened with Breaks My Heart, then did a few DTG songs. Finished with
Hand Of Law. After the set had drinx, and met some nice people, including
soul singer Gianna Hill. I was very happy and we drove home at 3am and I
fell asleep in the car.
The next day we filmed a set for the "Live At Sugar Hill" series. This
went fine except the band blew the ending of Hand Of Law, and my
headphones kept falling off so halfway through I got the engineer to gaff
tape them to my head. I haven't seen the film but I am told that the black
gaff tape looked like Elvis sideburns ....

Next day did an album signing at Cactus Records for the new vinyl reissue
of Radios Appear on "4 Men With Beards" label. Met some more good people
and reconnected with old friends from the My-Dolls who I recorded with
back in 1981.


After a productive weekend in Texas, I felt great. It was good to find out
for sure that my recent medical problems and surgeries did not, in the
long run, affect my ability to play the guitar.
Posted by Ronald Sanchez at 1:56 PM 1 comment: